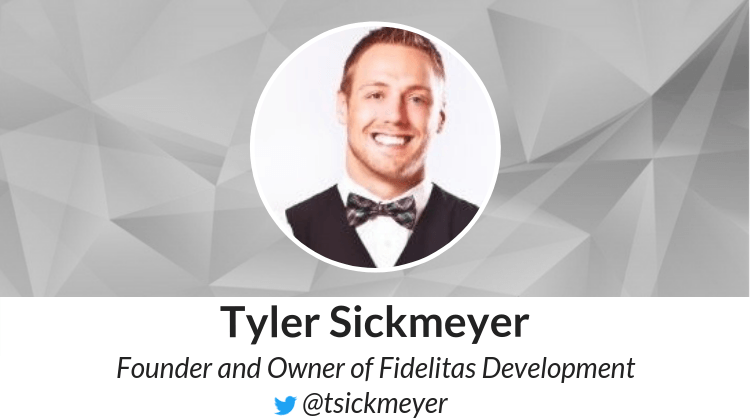 Tyler Sickmeyer is founder and owner of Fidelitas Development, a full-service advertising and marketing firm in San Diego that specializes in multi-platform e-commerce growth strategies. As a concert promoter, he was the first to use text message marketing. Today he develops marketing campaigns that stand out in a crowd for clients worldwide.

Sickmeyer spoke with us recently about how to measure the impact of marketing spend. In this Q&A, he discusses:

How do you measure the ROI of your marketing?

The first step is figuring out what we want to accomplish. Different businesses have different goals. For example, if you’re a B2B business, you might have a much more complex sales cycle, so the goal might be qualified leads in the funnel. For a direct-to-consumer business, the goal might be how many times the cash register rings as a result of someone finding you on an e-commerce site like Amazon or Jet.

What happens once goals are clearly defined?

Once we’ve determined what the actual goals of the campaign are, we define the tactics we’re going to use to reach them. We like to reverse-engineer the process.

For example, say you sell soda pop for $10 a case and you profit $5. We know we need to keep the cost-per-acquisition (CPA) rate under $4.99. The CPA is how much money is spent in time and effort, in actual dollars and cents, to make that sale happen. It needs to include the costs of upkeep of the website, ads and agency, if you’re using one.

If you run a brick-and-mortar business, say a convenience store, being profitable isn’t just about the profit from selling soda and snacks; it’s also about covering your rent and the cost of your employees. We want to take that same approach online when we’re talking about tracking ROI. Once we have an understanding of what the numbers look like, we’re going to take a step back, look at the campaigns, and learn the step-by-step process for a conversion or a sale on an e-commerce site.

Can you say more about how you reverse-engineer the sales process?

Step one is understanding how we drive traffic to the site. We’re keeping track of how much it costs to send somebody to the site. We do this by tracking:

We’re also taking it one step further and figuring out what the average sale is worth. For the sake of our math, we’ll say customers buy one case of soda on average at $10, and the profit is $5.

Let’s say for every ten people we send to the site, one clicks on the Add to Cart button. For every ten that click on Add to Cart, one checks out. So that would mean one out of every 100 people that visit the site pull out their credit card and purchase something. On average, 100 site visitors equates to $5 in profit.

When we go back and put ad campaigns together, everything is focused on how cheaply we send traffic to the site.

How does this relate to spending strategy?

If we can send 100 people to the site for $1, there’s $4 profit. So we have an ROI of four times the return on ad spend. For every dollar you put in, you’re making $4 in profit. You’ll do that deal all day, won’t you?

But now, let’s say it’s the other way and it costs us $10 to get 100 people to the site. Well, now we’re upside down because even though we’re generating sales, we’re spending $10 to make $5. You’re losing $5 every time you make a sale.

That’s why it’s so important to track, and why we look at the process that we focus on as reverse-engineering — what’s worth it for a client and what’s not.

When you have a large company that has local branches, how do you think about attributing your marketing spend?

There are several different schools of thought when it comes to attribution. Our agency practices multi-touch attribution. Let’s use the example of a car dealership that runs ads on radio and TV, in the newspaper, has a car on display at the local mall and sponsors a high school girls’ softball team. They’ve got all these different things going.

Well, what led to the sale? I highly doubt someone’s going to walk into the dealership and say, “You know, I found this car $5,000 cheaper somewhere else. However, you sponsored the softball team, so I’m just gonna get it here.”

Nor do they say, “I heard you on the radio and that’s why I came in.” People will get something in their heads. We had a car dealership client that would have their service department track which radio stations people were listening to when they brought in their cars for service. They’d do check-all-that-apply surveys about how buyers heard about them. What was so funny is that “newspaper” was an option and about 20-30 percent of the people checked that they saw the dealership in the newspaper. That dealership never placed an ad in a newspaper.

What does that kind of behavior mean for attribution?

That happens quite frequently. People misremember where they heard about you, especially if you are on many channels. And that’s why multi-touch attribution is so important.

The only way around the misremembering is if you have a straightforward call to action. If you run a franchise of burger joints, for example, only advertise 99-cent cheeseburgers in one channel. Then, you can directly attribute a sales increase in 99-cent cheeseburgers to that channel. But when you’re running the same messaging and your direct call to action is the same across all channels, it’s going to be very tough to say which one’s working and which one’s not.

That makes it tough to figure out ROI. Any tips?

One thing you can do is pay attention to search volume. You can track how often certain keywords are searched around the time your ads run. If you run an ad on TV that says, “Hey, visit ABCDealership.com” that’s great, but not everyone’s going to remember to do that. Instead, they’ll end up Googling “ABC Dealership.” It’s just the way people function.

You watch for a lift in search volume around the time your ads run, and if there’s a lift, you can conclude those ads are working.

One hack we have that works well for brick-and-mortar businesses and small businesses is text message marketing giveaways. We love them because they build lists of interested parties. We recommend giving away something that’s relevant. If you’re a pet store, give away free dog food for a year or free grooming services.

You know who doesn’t want that? People who don’t own pets. They aren’t your core customers. Everyone that sends a text is a potential customer — when is the last time you entered a contest to win a prize that you didn’t want?

You can offer different keywords on different channels. Your keyword might be “dog” on radio, “cat” on TV and “pet store” on online media. That way you can measure the direct responses from consumers trying to win the product. You get a sense of how warm the waters are for your sales efforts across those channels. Then, you’ve got a list that you can nurture without paying to reach it time and time again. That’s a primary reason we recommend text message marketing for a brick-and-mortar business.

It seems like that approach could be used across channels: Use a contest or giveaway targeted to the kinds of customers you want to reach over email or other outlets.

If you’re trying to use it for attribution measurement, email’s tough because it’s a multistep process. You’re saying, “Hey, go to our site and give us your email.” That’s a lot of work, depending on what platform you’re using. If you’re using radio, where do most people listen to the radio? In their car while driving.

If you have a text-to-win call to action and you use a different keyword for every media channel, you have actionable data on how many people responded to that specific ask. You can do that a couple of times a year and have a great sense of what’s working and what’s not.

What other strategies can businesses use to gauge ROI when using multiple channels during a campaign?

We had a large retail client that does well over nine figures a year and was opening a new brick-and-mortar store in a brand-new small market. There were no Arbitron or Nielsen numbers to go off of, so we were shooting in the dark regarding media spend.

What we did for the grand opening is called up every outlet in town — billboard companies, radio, TV, everything. We said, “Hey, we’re gonna give you all the same budget. We’re going to give you all $500, and you can bonus whatever you want to bonus. How your response is compared to everyone else’s in town will dictate the budget for the rest of the year.”

We ended up with five or six times the value we paid for, because everyone was falling over themselves to give us everything. We made it a true competition between the media outlets. Instead of getting our feet held to the fire, we had all the leverage in that situation.

So the lesson is you can get channels to compete against each other if you’re willing to put in a little bit of time?

Absolutely. Most of the time, media outlets and platforms really have the advantage in negotiations because there’s limited inventory. If you present a situation where they’re competing for the budget and they know it’s a true and fair competition and not just who bought lunch last time, it really is going to come down to numbers. All of a sudden they get antsy and they’ll throw a lot of added value incentives in.

What’s a way to set up such a competition?

What we’ve done in the past is buy different variations of customized domains and develop landing pages. Maybe you have StoreCity.com, CityStore.com and NewStoreCity.com—however many variations you need. Then base your results off of good, old-fashioned web traffic in Google Analytics.